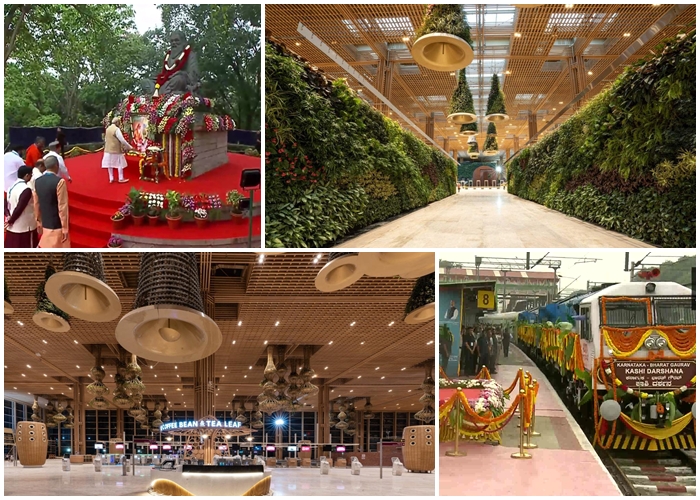 New Delhi: Prime Minister Narendra Modi is on a 2-day visit to the southern states of Karnataka, Tamil Nadu, Andhra Pradesh and Telangana. On Friday, PM Modi inaugurated the glitzy Terminal-2 of the Kempegowda International Airport (KIA) in Bengaluru.

The new eco-friendly terminal in which bamboo has been extensively used has been built at an estimated cost of Rs 5,000 crore.

Nicknamed as ‘Terminal in a garden’, the new infrastructure facility at the KIA will cater to 2.5 crore passengers annually, KIA officials said.

“The T2 is an architectural wonder, which is a first-of-its kind ‘Terminal in a Garden’. It will have lush greenery within and outside and will be a visual delight like no other in the world. The passengers’ experience is designed to be a walk in the garden while traveling through the new terminal,” a KIA official said.

On the first day of visit, he will launch several development projects and flag off South India’s first and India’s fifth Vande Bharat Express train. He will also attend a convocation ceremony in Madurai, Tamil Nadu.

Prime Minister Narendra Modi inaugurated and reviewed Terminal-2 of Kempegowda International Airport. The terminal has been built at a cost of about Rs 5000 crore.

Karnataka | PM Narendra Modi to inaugurate Terminal 2 of Kempegowda International Airport in Bengaluru, built at a cost of around Rs 5000 crores, on Nov 11.

T2 is designed as a tribute to the Garden city of Bengaluru; passenger experience is meant to be a “walk in the garden”. pic.twitter.com/0bFyyt7n1G